FLATOUTbear™ makes its film debut in a top 10 Netflix movie, A Perfect Pairing

Australia’s favourite snuggly toy, FLATOUTbear™,️ has made its film debut in the romantic comedy A Perfect Pairing, which was released on Netflix on May 19, 2022. Victoria (Lola Alvarez) Justice and Adam Demos (Max Vaughn) – co-stars of A Perfect Pairing
Established in 2001 by sisters Sarah Novati and Prue Trollope, FLATOUTbear™ is based in Sydney, Australia. Inspired by their desire to share their love of flat bears, FLATOUTbear™ has since become an Aussie classic, more so because it is made from 100% Australian sheepskin.

Given its legacy, it’s no wonder that FLATOUTbear™ makes the perfect accessory to – almost another character in – A Perfect Pairing. Shot in Queensland, Australia, and produced by Hoodlum Entertainment in collaboration with Screen Australia, the top 10 Netflix movie follows the story of Lola Alvarez, an LA-based wine executive.

In her efforts to secure a potential client for her startup, Lola flies to Australia, where she finds herself working as a ranch hand on the client’s sheep farm under the direction of the handsome but mysterious Max Vaughn to prove her proficiency.

In the tradition of all great love stories, she wins the client and the heart of her love interest, Max, but not without some mishaps and misunderstandings along the way, plus a big reveal. Described as a fun watch for lovers of wine and girl boss success stories, A Perfect Pairing is directed by Stuart McDonald and stars Victoria Justice as Lola while Adam Demos plays Max.

“We are beyond excited that our FLATOUTbear™ Milk was chosen to feature in a top 10 Netflix movie. To quote the female lead, Lola Alvarez, played by Hollywood actress Victoria Justice ‘It’s a FLATOUTbear™. I have never really heard of them, but it’s a thing here in Australia.’ She could not be more right; we sure are a ‘thing here in Australia.’ Plus, the producers and director could not have picked a more fitting gift to use in A Perfect Pairing as all FLATOUTbears™ are made of 100% Australian sheepskin,” explains co-founder Prue Trollope.

“It isn’t the first time in our 21 successful years in business that FLATOUTbear™ has found fame, but our guest appearance in A Perfect Pairing may be the biggest jewel in our celebrity crown to date. We look forward to it being one of many such opportunities,” concludes Prue. 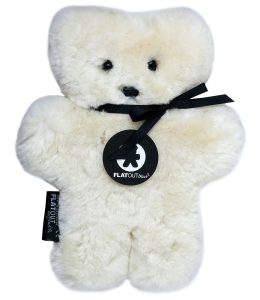 Established in 2001 by sisters Sarah Novati and Prue Trollope, FLATOUTbear™ is based in Sydney, Australia. Inspired by their desire to share their love of flat bears, FLATOUTbear™ has since become an Aussie classic, loved by babies, kids, celebrities, and even pets worldwide. Unbelievably soft, irresistibly snuggly, and naturally soothing, each FLATOUTbear™ is made by hand from 100% Australian sheepskin.